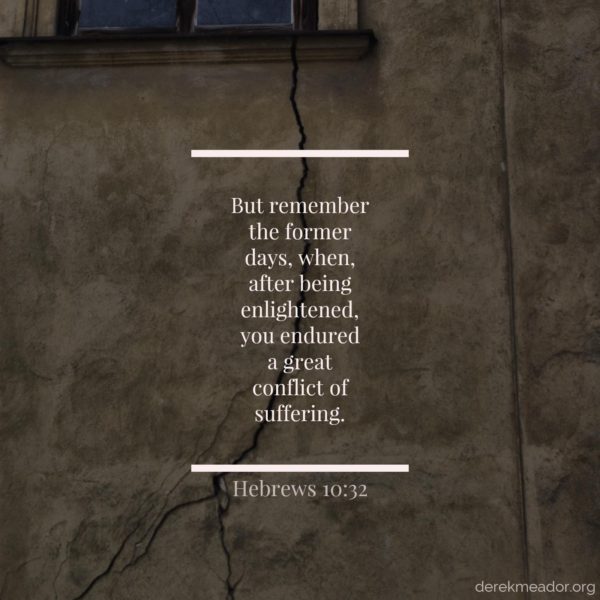 I’ve never been a big fan of the whole “Open your Bible and close your eyes and you will get a big surprise” method of Bible study. Perhaps because when I was younger and had no idea how to systematically study the Word that was exactly how I’d approach it. I’d close my eyes, open to a random page and point. It was almost always to a genealogy or some other equally exciting passage.

That of course does not mean that I think God can’t choose to direct one to a specific teaching He wants them to have. I believe that happened to me on January 1, 2017.

2016 was without a doubt, the worst year I’ve had in my entire life. I experienced more turmoil, doubt, and rejection than ever. I found myself questioning both God and my faith numerous times. While not a manly thing to admit to, 2016 probably has claim to more of my tears than the rest of my life combined. Through it, I’d started becoming disobedient. I started 2017 wanting to put 2016 behind me. Burn it up and never think of it again.

That was my mood when I opened my Bible on January 1, 2017. I didn’t intend to randomly read a passage, I was trying to find a specific verse I’d read earlier. I opened it and started reading Hebrews 10. Boy did I need it!

Several of the verses in this chapter spoke to me that morning. Among other things, verse thirty-two…

But remember the former days, when, after being enlightened, you endured a great conflict of suffering.” Hebrews 10:32 NASB

A quick bit of background info. I jumped into the race (accepted Christ) for the prize at seventeen. Unfortunately, I sat on the starting line for years. As a matter of fact until a few years ago many people would never have guessed I was a Christian.

I cried out to God in early 2013 to break me and forgive me for wasting so much time. I had three years of amazing change in myself. I felt so in tune with God. That changed at the first part of 2016 and I wanted to completely forget 2016. But here, God’s Word is telling me to remember a “great conflict of sufferings” that were endured “after being enlightened”. None of the versions I read say things like, remember when some of you endured, or you might have endured.

I get the distinct impression that when you experience spiritual enlightenment, you will experience great suffering AND… you need to remember it.

I don’t want to remember it. I want to forget it. But I need to remember it. Chapter 10 closes with comments about endurance and faith. I will not forget. I will endure.

Timothy Keller! You Knock That Off Right Now!

Am I a Christian Nationalist?

Should I Stay or Should I go Now